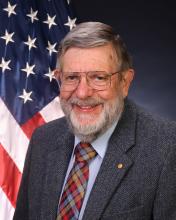 Dr. William D. Phillips was born in 1948, in Wilkes-Barre PA, and attended public primary and secondary schools in Pennsylvania.  He received a B.S. in Physics from Juniata College in 1970 and a Ph.D. from MIT in 1976.  After two years as a Chaim Weizmann postdoctoral fellow at MIT, he joined the staff of the National Institute of Standards and Technology (then the National Bureau of Standards) in 1978.  He is currently leader of the Laser Cooling and Trapping Group in the Quantum Measurement Division of NIST's Physical Measurement Laboratory, and a Distinguished University Professor at the University of Maryland.  He is a Fellow of the Joint Quantum Institute, a cooperative research organization of NIST and the University of Maryland that is devoted to the study of quantum coherent phenomena.  At the JQI he is the co-director of an NSF-funded Physics Frontier Center focusing on quantum phenomena that span different subfields of physics.

The research group led by Dr. Phillips at NIST has been responsible for developing some of the main techniques now used for laser-cooling and cold-atom experiments in laboratories around the world, including the deceleration of atomic beams, magnetic trapping of atoms, the storage and manipulation of cold atoms with optical lattices, and the coherent manipulation of Bose-Einstein condensates.  In 1988 the NIST group discovered that laser cooling could reach temperatures much lower than had been predicted by theory, a result that led to a new understanding of laser cooling and contributed to many of the subsequent developments in cold atomic gases.  Early achievements included reaching laser-cooling temperatures within a millionth of a degree of Absolute Zero.  Today, the group pursues research in laser cooling and trapping; Bose-Einstein condensation;  atom optics;  collisions of cold atoms;  quantum information processing;  cold atoms in optical lattices;  production and transmission of non-classical light;  and the study of cold-atom analogs to condensed matter systems.  Phillips and colleagues demonstrated the first “atomic fountain” clock as proposed by Zacharias.  Such clocks, as realized in other laboratories, have become the primary time standards for world timekeeping.

For additional biographical information prior to 1998, see: http://www.nobel.se/physics/laureates/1997/phillips-autobio.html

Other Sponsors and Exhibitors